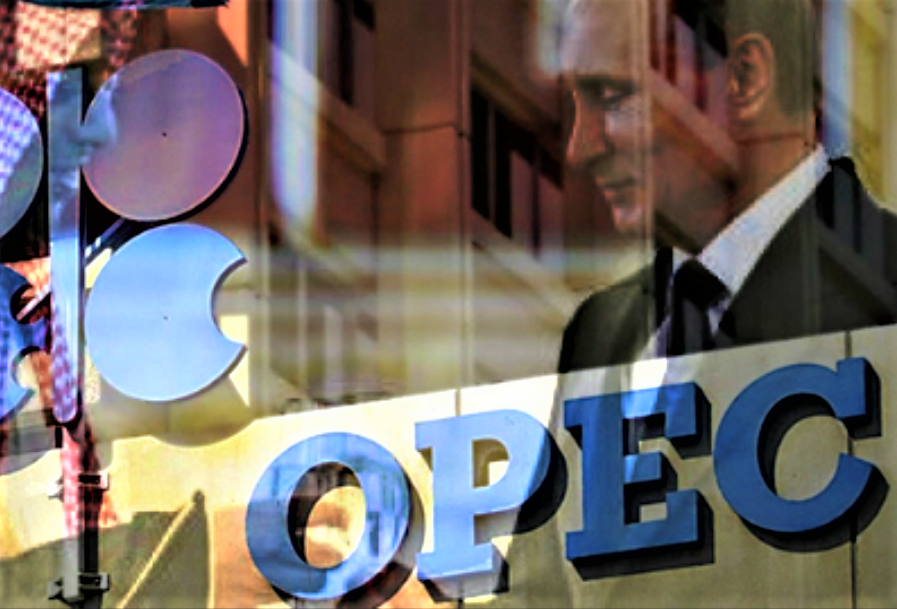 There has been a steady demand reduction for oil due to the spread of COVID-19 in the world. The main reasons were the current and forecasted decrease in GDP among countries around the world. The restrictions on the movement of people around the world were introduced, business and private travel, including tourism have almost stopped. Restrictions on movement inside the country by transport have also been imposed in many countries. According to some estimates, about 40 percent of the world’s population has been advised to limit their stay outside their homes. 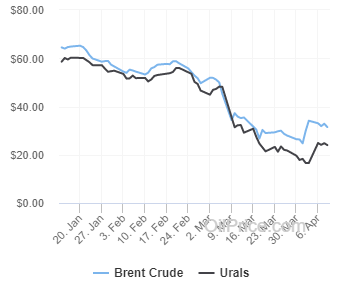 Demand for oil in the world has started to decrease significantly, while oil production has remained at the same level (overproduction). Storage space for oil and petroleum products was gradually being filled. The consequence of the decrease in demand for oil was the rapid decrease in oil prices. Since March 6 and until March 31, 2020, the price for BRENT oil fell from $50 to $26.3 per barrel, and for the Russian URALS fell from $48.2 to $17.8.

The fact that the demand for oil will fall was evident not only for economists and representatives of business circles, but also for politicians. Some of them decided to take advantage of the situation to gain geopolitical advantages.

The Russian Federation, for example, has decided to take advantage of the fall in oil prices to either cause economic damage to the US or to induce concessions in other geopolitical issues.

The fact is that Russian “Silovarchs”1 have long tried to use oil as a means of influencing not only European countries but also the US. According to their calculations, the cost of “shale” oil in the US is higher than oil produced using the traditional method in Russia. “Shale” oil accounts for a significant share of total production in the USA. If oil prices were kept at a relatively low level within the limits that would preserve the profitability of “traditional” oil production and simultaneously made “shale” oil production unprofitable, the producers of “shale” oil would suffer serious negative consequences.

Reuters agency reported about such intentions of the Russian leadership back in February 2019. According to the newspaper, the Head of Russian oil giant “Rosneft” Ihor Sechin in December 2018 in his letter to the President of the Russian Federation noted that the agreement in place since 2017 between the Organization of the Petroleum Exporting Countries (OPEC) and other countries (OPEC +)  to cut oil output has actually created a preferential advantage for the USA, that sees raising its own market share and the seizure of target markets as its primary task. According to Sechin, this has become a strategic threat to Russia’s oil industry development

But then the agreement with OPEC was still extended, and one of the reasons was cited as other geopolitical interests. Extension of the agreement could be seen by Russia as an argument in the dialogue primarily with Saudi Arabia on concerted actions in Syria.

Taking into account the current presidential elections in the United States, the general deterioration of the oil sector of the US economy, financial problems of oil producing companies, the threat of closure and even bankruptcy of small companies in this sector, the increase in unemployment may significantly affect the support of the acting President of the USA. Therefore, according to this logic, price pressure on the United States opens a “window” of opportunities for the Russian Federation.

The Russian Federation’s actions can be explained if guided by this logic when on March 6 of this year it withdrew from OPEC negotiations, where Saudi Arabia plays a major role as the largest oil producer within the representatives.

This was preceded by a meeting between the President of the Russian Federation V. Putin and representatives of the Russian Government, the Central Bank, “Rosneft” and other oil companies. According to a publication, this time Sechin’s argument was correct.3

Saudi Arabia’s response was immediate and harsh, although high-risk. Saudi Arabia began to rapidly increase its oil production, and representatives of its companies began to offer massive discounts on it, including in markets that are traditional for Russia. Oil prices have continued to fall rapidly, and the game on “nerve strength” began.

In addition, let us recall that the USA imposed sanctions against “Rosneft” for Russia’s support of the ruling regime in Venezuela even before the massive spread of COVID-19. Therefore, the Russian Government even resorted to certain legal tricks to get this company off the hook: for the first time, the Russian Government’s stake in “Rosneft” has become less than 50 percent and now amounts to 45 percent of the capital stock.

Before that, the Russian Federation had plans (so far unattainable) to gain decisive influence over the Venezuelan oil industry, with the world’s largest oil reserves. Operating with its own oil reserves and having a decisive influence on the Venezuelan oil industry, the Russian Federation saw this as a step toward dominating the world market, opening up new markets and increasing revenues – both it’s own and those of Venezuela’s Maduro Regime that desperately struggling for self-preservation and in dire need of financial resources.

A few weeks later, it became clear to the Russian leadership that it was impossible to oppose Saudi Arabia with US support. With the current record low oil price, Russia’s economy will be in a very dangerous position faster than its allies will feel the negative consequences.

Russia tried to use its favorite method of spreading disinformation as usual, but this time it failed. Despite the fact that Russia itself refused the OPEC agreement, the President of the Russian Federation Putin said it was not Russia, but Saudi Arabia trying to harm the US oil shale industry. In turn, the Ministry of Foreign Affairs of Saudi Arabia noted that in the words of the Russian President “there is not a single drop of truth.”

It is clear that there is trust between the United States and Saudi Arabia, and Russia has almost no allies in the world. For example, the supervisory board of Saudi Aramco, the world’s largest oil producer, includes several well-known U.S. citizens, one of whom is Mark Weinberger, former Advisor to the President of the United States.

It is evident that Russia overestimated its forces and had to return to the negotiating table and eventually make serious concessions. As a result of negotiations between the OPEC countries and other countries that are not part of this organization, Russia agreed to reduce oil production. The reduction will be in the same volume as for Saudi Arabia, by 2.5 million barrels per day, which at first glance does not look like a defeat. But what is important here is not only the volume of decrease but also the volume of production from which the decrease should be calculated.

Note that the President of the United States Donald Trump welcomed the concluded agreement, with no geopolitical concessions on the part of the US.

Therefore, within a few weeks, Russia suffered not only economic but also a serious loss of face. The ruling elites of the world have noticed the absence of Russia’s decisive influence on the oil market and its lack of real allies.

Many states have seen that it is possible to talk to Russia from a position of power, albeit economic. 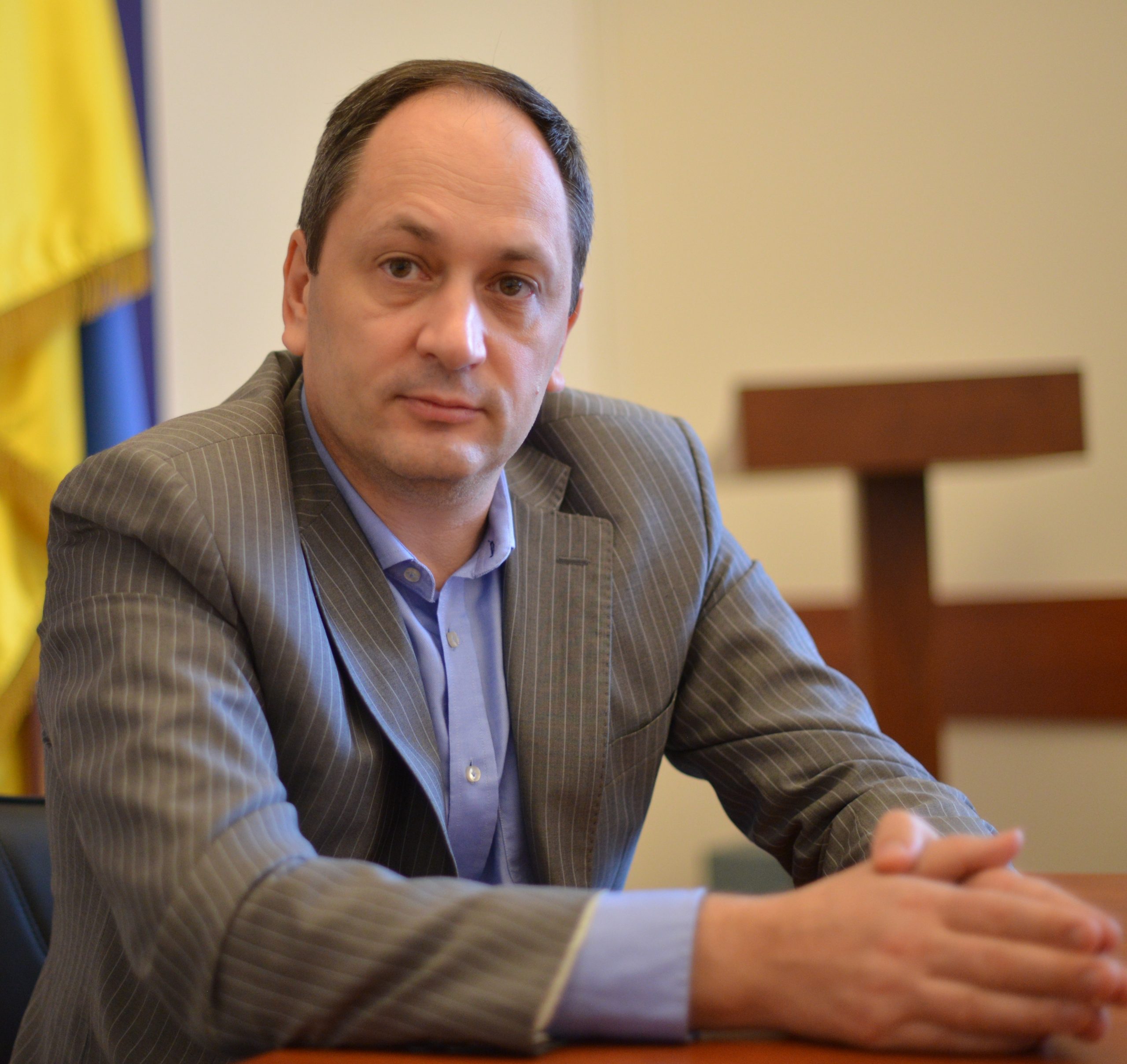 Vadym Chernysh, PhD in Law, the Head of the Governing Council of the Center for Security Studies “CENSS”