Center for Security Studies “CENSS” presented the results of the analytical study on illegal trafficking of weapons to international partners of Ukraine from foreign embassies and international organizations.

We publish the main results of an analytical study conducted in the period from September 2019 till January 2020 to identify the main tendencies and signs that indicate the state of illegal trafficking and use of weapons.

The situation with the trafficking of weapons in the country is a catalyst for many important factors. First and foremost, it is an indicator of state, public and military security. All three areas are critically important for Ukraine, amid armed conflict [1], which has lasted for six years and the occupation of part of the territory.

The analysis of the weapons trafficking makes it possible to understand important processes that take place both on the social and political levels in the country. In particular, what is the efficiency of state institutions, such as law enforcement agencies? Are social programs for working with youth and ATO veterans effective? Are measures implemented in the country to prevent violent conflicts – political, domestic, group or individual? Do people in communities feel safe and trust state institutions in this issue?

The Center for Security Studies “CENSS” analyzed the cases of use of illegal firearms, ammunition and explosives in different regions of Ukraine in the period from September till December 2019. During this time, 548 events related to the illegal use, possession and proliferation of weapons were identified. [2]

For example, in September, in Mykolaiv Oblast, the 48-year-old man shot three work colleagues at once due to hostility relationships. The shooting in Kharkiv became a high-profile event, which took place on October 25 near the supermarket “Vostorh”. Two unidentified persons fired at two men, one of them died on the way to the hospital. On October 5, foreign citizens opened fire against passers-by in Kyiv, after which they left the crime scene, on October 17, four unidentified men fired at a vehicle, the driver of which died on the spot from a gunshot wound.

In November, in Kharkiv, a 14-year-old teenager invited mother and brother of his girlfriend to a mall, with whom they had a conflict, and fired against a woman and her son in a mall, hitting the victims in the head.  In the same month in Donetsk Oblast during the inspection of parcels in the express delivery department, police officers found 9 grenades with fuses, 5 explosive assemblies and more than 200 rounds of ammunition. The owner of the ammunition was a resident of Poltava Oblast.

In December, the police officers in Rivne Oblast seized more than 10.2 thousand weapons and ammunition that had been kept in the garage by a man. And four persons were detained in Kyiv Oblast, who during the attack on the house of the businessman opened fire at police officers and tried to use diversionary grenades.

According to the monitoring the most of 548 “armed” events were recorded in Dnipropetrovsk, Kyiv, Donetsk Oblasts and city Kyiv in the period from September till December 2019.

Fewer of such cases were recorded in the course of four months in Khmelnytskyi, Chernihiv and Ternopil Oblasts.

Most often, law enforcement officers recorded cases of weapons possession and use.

It is not easy to make a portrait of conditionally dangerous persons, because these are mainly groups of persons related to illegal weapons trafficking, violent crimes and drug trafficking.

The most frequent cases of illegal use or possession of weapons were recorded among young persons of 18 to 25 years old.

The risk group includes foreigners – citizens of the Russian Federation, countries of the Caucasus region, Moldova (Transnistria). Unfortunately, there is a separate category in this list – the ATO participants. Information on cases of illegal trafficking and use of weapons among servicemen and participants of ATO/JFO is contained in thousands of court decisions, including criminal convictions, in the Unified State Register of court decisions. According to the results of the analysis of such decisions, the typical cases of illegal trafficking and use of weapons by the above category of persons have been tentatively revealed: transport of weapons from places of military service [3][4], use of weapons assigned to military personnel to resolve domestic conflicts [5], including family conflicts [6], illegal acquisition of weapons originating from the ATO/JFO area [7], including through an abuse of official position  [8].

Nowadays, weapons can also be acquired through the Internet, and the range of their use is indeed impressive. Firearms and explosives are used in domestic conflicts and political disputes, and the situation of throwing grenades in public places is increased. Therefore, the lack of control over the trafficking of weapons in the country frightens with the unpredictability of the consequences. Especially if taking into account the fact that weapons are also found in airports, bridges and water supply facilities. These are areas of critical infrastructure.

In a course of analysis of 548 cases of illegal use of weapons, it was indicated that the largest number of identified weapons were explosives – mines, grenades, TNT slabs and fuse caps, at least 623 items were seized.

A large number of integral parts were also seized. Next comes small arms: handguns, short rifles, rifles, assault rifles – 445 items. 69 grenade launchers were found in weapons caches, premises and vehicles. Hunting rifles, machine guns, traumatic and pneumatic weapons were recorded. According to the analysis of the Center, Ukrainians “prefer” grenades and handguns 439 and 255 items respectively. The most common ones are RGD-5 and F-1 and Makarov pistols.

According to the monitoring results, there were identified and recorded the circumstances of the use of explosives and light weapons.

Monitoring data for the period from September till December 2019 indicates that weapons were most often seized in cases of aggravated criminal offenses (as provided by Article 67 of the Criminal Code of Ukraine).

Thus, in 33% of the cases identified during the monitoring an offense was committed by the following entities:

Regarding other circumstances of committing criminal offenses with the use of weapons, it has been established that there is a consistent pattern of detection among persons who use or trade-in drugs and psychotropic substances. The total number of such cases for the period from September till December 2019 was 73, which is 14% of the total number.

In addition, the results of the monitoring revealed a tendency towards the widespread use of weapons during domestic conflicts (50 cases, or every 10th case) in relation to relatives, family members, visitors of catering establishments, etc. At the same time, both registered weapons, for which the owner has a permit, and illegal weapons are used during domestic conflicts.

The results of the monitoring also revealed new circumstances for the use of explosives and light weapons. For the period from September till December 2019, there were recorded shootings in public places, shooting or laying of explosives on the territory of households, shooting or laying of explosives in vehicles, as well as shooting of commercial premises. Such actions are most often resorted to in case of business conflicts, conflicts on professional grounds, revenge, entities of such illegal actions are representatives of criminal groups, often young persons are among them. A total of 57 cases have been identified, which accounts for 11% of the total number of reports analyzed.

The use of explosives during the robbery of financial institutions, in particular banks, has become a new and sustained tendency in the use of arms and explosives. Between the periods from September till December 2019, there were at least 16 cases of ATMs blow-ups. 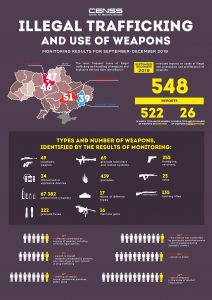 Illegal trafficking and transportation of weapons by regions of the country is also thriving. Insufficient level of control over these processes, as well as the lack of effective educational training among personnel in law enforcement agencies, the lack of social and psychological assistance for the veterans of the ATO/JFO leads to the aggravation of the issue. Monitoring shows a change in the nature of crimes to a more dangerous one: armed robberies and the increasing use of weapons in domestic disputes.

Illegal trafficking of weapons poses direct threat to personal safety. Access to weapons by organized criminal groups, radical organizations and other formal and informal groups challenges the state monopoly on the use of force, including the use of weapons. Under such circumstances, informal centers of influence on economic, political and other socially important processes can be established separately from state and local authorities. The proliferation and relatively easy access to illegal weapons for the large number of protest events involving persons with weapons skills, which were observed among the population in the period from September till December 2019, are obvious risk factors that should be taken into account by both the organizers of protests and the authorities.

In addition, the large volume of illegal weapons in Ukraine, their moderate price and easy access may be an incentive for the activation of sustainable criminal groups, including transnational ones. Including issues of illegal weapons trafficking in or from Ukraine.

The lack of a proper legislative framework to regulate weapons trafficking in Ukraine is the main negative factor summarizing the aforementioned.

In this case, there is a need to amend the whole set of legal acts for the proper regulation of the ownership of weapons and weapons trafficking in Ukraine. Modern realities do not allow us to live by the old rules and make significant adjustments to approaches to the state order and security.

[1]The term used within the meaning given in Article 2 of the Geneva Conventions dated from August 12, 1949, includes all cases of declared war or any other armed conflict which may arise between two or more states, even if one of them does not recognize a state of war, as well as cases of partial or total occupation of a state, even if that occupation does not encounter any armed resistance.

[2] The study was conducted by means of the analysis of information obtained as a result of special processing of information received from open sources (official websites of state and local authorities, law enforcement agencies of central and regional levels; their profiles in social networks (Twitter, Facebook); Ukrainian digital mass media), state statistical reporting,  unified state register of court decisions, data of sociological surveys.